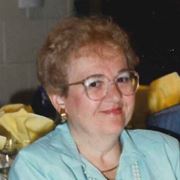 Last night, I sat for a very long time as a blank page in my notebook stared back at me. How could it be that my mother – a woman of words and creativity throughout her life, who inspired my love of language, and indeed most of who I am – was the force field that made my own words somehow inaccessible to me? How do you begin to describe, to celebrate, to share with you all, the life of an eshet chayil that was my mother? Where do you start to be able to express the richness of a life that seemed, from the outside, to be one of profound humility, entirely ordinary that has left such an incredibly rich legacy, not of material things or conspicuous opulence, but a legacy of what really matters when you sum up the final accounting of a life fully lived.

Do you measure the volume of the tears now shed by the hundreds of people whose lives she touched? Do you look to the vibrancy of an institution that is a piece of the heart of Toronto’s Jewish community that she and my father helped to establish and build—literally with their own hands? Do you consider a family which has faced challenges upon challenges over the decades – far more than a family deserves to bear in one lifetime – and at the centre of it you find the rock, the glue, the unifying power that holds it together through sheer force of will embodied in my mother.

She came to her centeredness on family quite legitimately, through living the example of the family my Bubbie and Zaidie – zichrono livracha – created. To her much younger sisters she was, and forever will be “Dodo” – Zaidie’s Russian-accented mispronunciation of “daughter” that stuck with Marilyn and Lyba. They shared everything in their respective lives and were as close as sisters could be. And when the end was approaching, in the way that we all hope to depart this world, it was Lyba and Marilyn who organized her care, enabling her a peaceful and pain-free departure to the olam habah.

Throughout her life, my mother enjoyed something to which many of us aspire: a quiet passion and intensity for everything she does. And she did a lot! There was her business that she bootstrapped to ultimately service some of the biggest names in Canadian industry. There was her weekly “slice of life” column that she wrote for the Jewish Standard. There were her aspirations of being a playwright that saw one of her scripts produced at one of Toronto’s major theatres at the time. She most certainly lived up to her own admonition to me as a child that “I’m not the stay-at-home-and-bake-cookies type of mother”—this in the 1960s when most women were exactly that. And where was this quiet, intense, no-cookie-baking passion mostly focused? The energy was directed towards two targets: to Beth Am, the shul community that defined her identity even until her last days, and to the 63-year love affair with my father that never waned no matter what.

My parents were founding members of Beth Am, and even though it amalgamated with the then B’nei Israel Beth David over 30 years ago, my mother still identified herself in her heart as a Beth Am-nick. She worked in the Hebrew School as both a secretary and resident writer/director, creating annual cantatas and plays, myriad playlets based on the weekly parshiyot, and pageants for the chagim. She worked closely with the rabbis – the great ones and the ones that were, shall we say, more challenging to get along with. And in this, we begin to understand the particular “people wisdom” that my mother possessed.

She was able to see into people and gain a deep understanding of who they truly are at their core. And most of all, she was able to draw from them the greatness of their own potential. And how did this manifest in its greatest expression? In none other than her beloved Beth Am Players. In fact, if you were to ask any surviving member of Beth Am, “with what would you most associate my mother?” you would undoubtedly receive a unanimous response: She was the creative driving force behind “The Pyjama Game,” “My Fair Sadie,” “Laugh-Out,” “Hello Molly,” “Poor Old World (We love you anyway),” and many others culminating in “The Mishikado,” (produced at Temple Sinai) and a slew of on-the-road charity productions at hospitals, nursing homes, retirement centres, and convalescent homes, including a final production, entirely in Yiddish.

Through these we can begin to understand how my mother integrated most of the aspects of her life that were most important to her—her connection to the Jewish community, her incredibly strong, indelible, life-long affiliation with a beloved shul, her creativity and love of the arts, and all of it done in a way that was so grounded, so authentic and not pretentious. Passion and humility.

My parents shared one other thing that most people would admire: a life-long, abiding love and respect for each other. And theirs was not a life free from strife and struggle, one defined by material privilege that sometimes makes a relationship somehow easier to manage. They were, by all accounts, “joined at the hip” for their 63 years together—truly inseparable, aside from the times that medical need intervened. I recall five years ago, when we celebrated my mother’s 80th birthday, how my father fêted her as if they both were newlyweds: Such was the depth of the love they felt for each other. As I looked at some old pictures of them from back in the early Beth Am days, both of them at an age close to that of my own children today, I realized that this is the woman whom my father saw each and every day when they awoke together, ate breakfast together, read the newspaper together, planned their day together, and over 63 years, built a family, a home, a community, and a life—together.

So what do we think Hashem might have thought about my mother and what she did with the 85 years He granted to her? My mother left this world yesterday, on the 18th of Tishrei. And therein is, I think, the message from Hashem: 18. Chai. Life. She was the exemplar of a life to which we all can aspire. May her memory inspire all of us whom she touched to live a life as rich and as full as she did.