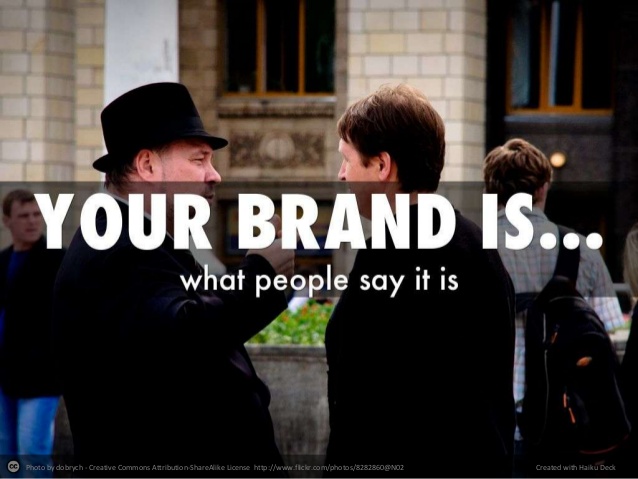 Are You Leading Your Brand, and Branding Your Leadership?

“Mr Bond, they have a saying in Chicago: ‘Once is happenstance. Twice is coincidence. The third time, it’s enemy action.’” Ian Fleming’s Goldfinger may be more menacing in his notice of repeated occurrences. For me, once is a notice. Twice is an observation. The third time, it’s emergent pattern. Over the past couple of weeks, I’ve had not one, not two, but three conversations that began with my in-depth analysis work transforming operationally oriented voice-of-the-customer (and social media) data into strategic, actionable insights. But, it’s where they ended that caught my notice and suggested the emergent pattern—the strong link among brand development, leadership, and organization culture.

In one sense, this is not at all surprising. A brand is what your product, service, or company is in the collective minds of your customers. It expresses the sum total of the perceptual relationships that you have with your public—how people feel about you and your offering(s), what they represent, the personality attributes they convey – which is more about the emotional responses they engender than, you know, their actual personality – the expectations they set, the identity they create, the behaviours they enact and encourage, the promises they make. Organization culture, arguably, establishes much the same connections among an organization’s members, both internal and external to the organization. The dominant themes of that culture are enacted in the environment enabled by the organization’s leadership. In extreme cases the two merge to such an extent that the organization almost becomes more known for the brand of its culture than the brand of its offering (Hello Holacratic Zappos!).

In a paper on Branded Service Encounters (Siriani, Bitner, Brown, & Mandel, 2013, Journal of Marketing) the authors describe how service interactions with customers should ideally be aligned with the brand’s positioning. For example, Lululemon seeks to hire staff who portray an active and enthusiastic lifestyle; Southwest Airlines (or WestJet in Canada) would employ people whose everyday activities are infused with fun. Siriani and her co-authors point out that “aligning employees’ behaviour with brand personality serves to strategically link the employee and brand in customers’ knowledge structure.”

However, vital to the success of this endeavour to imprint the brand’s personality on each and every customer interaction is how authentically customers perceive the interaction to be. Pasting on a smile when staff are drowning in low morale won’t work—“the beatings will continue until morale improves” is neither an effective strategy nor sustainable! Authenticity – the degree to which customers experience sincerity in staff’s brand-aligned behaviours – occurs when employees genuinely feel and embody the culture’s values espoused through brand positioning. Thus, a brand whose positioning is well aligned with the organization’s culture-in-use enables employee’s external actions to match well with their internal feelings. (For those relatively new to the concept originally conceived as espoused theory and theory-in-use by Chris Argyris, “culture-in-use” refers to the way an organization’s culture is actually enacted, as compared to the “espoused culture” of what is said. An organization might, for example, espouse collaboration, yet the in-use or enacted culture conspicuously rewards individual achievement.)

Trickle-down economics doesn’t work all that well. But trickle-down culture as enacted by leaders? That’s quite another matter. Irrespective of the corporate values on display in the lobby, or moulded into metrics that drive performance reviews, employees observe and follow the lead of leaders in much the same way that a two-year-old emulates the behaviour of her parents. In a fascinating paper published in the Academy of Management Journal in 2012, Liu, Liao, and Loi explore “The Dark Side of Leadership”—specifically, the “cascading effect” of abusive behaviours from senior supervisors down the line. I described the particular effects to which the paper refers in an earlier blog post. Among the effects, simply put, is the notion that employees will look to, and emulate, the leader’s behaviours – good behaviours and bad – if they believe that enacting such behaviours paves a path to personal success in the organization. Any perceived inconsistencies between the organization’s espoused cultural values and the leader’s embodied attitudes will inevitably be noticed. That inconsistency inevitably fuels cynicism and a host of ills, from disengagement to malicious compliance to creating bureaucratic quagmires. Forget about innovation and creativity—another finding of the paper. And forget about authentic, branded service encounters, too.

Quite a number of great examples come to mind that vividly illustrate stark disconnections between actual, in-use leadership behaviour and espoused organization cultural values. However, in the interests of avoiding libel suits, they will remain in my mind. Instead, have a flip through this Prezi about WestJet, paying attention to the comment about how most airlines ignore the human factor, something about which WestJet takes great pride, among both its customers and employees, collectively, (some of) the organization’s members. Such a focus on “the human factor” leads to culture-creating behaviours that are modelled by the senior leadership and authentically enacted by individuals throughout the organization, irrespective of role or rank.

Putting all this together, the logic is fairly straight-forward. As a leader, you’re enabling an environment that will inevitably yield a culture—the collective, enacted behaviours among employees as they engage – for good or for ill, authentically or not – with customers. Literally, when it comes to attitudes that directly affect day-to-day actions, employees follow the leader. They see and do, much as your young children might. Thus, a leader who embodies espoused brand values and personality contributes to a healthy, engaged culture enables employees to do the same. They, in turn, provide authentic, branded service encounters with customers. Doing so can become a secret marketing weapon, especially for relatively unknown brands where such encounters have to potential to match or even surpass market leaders (according to the Siriani et al. results).

The moral of the story: Like other aspects of an organization’s existence, when it comes to branding, culture does indeed eat strategy for breakfast, and the leader is the chef in the kitchen!