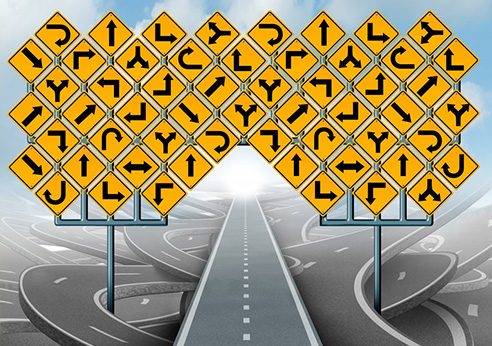 Managing in the 20th century was complicated. I mean, really complicated. There was so much going on among customers and supply chains and plants and distribution centres and you-name-it that it was a challenge to keep track of it all. But that’s the point: We could keep track of it all. We could plan, set goals to accomplish a mission, break down those goals into manageable tasks, and provide sufficient individual incentives so that if everyone did their part and met their targets, the organization as a whole would accomplish its overall objectives, year-by-year.

Then came that darned millennium, fuelled by technologies that made our complicated but mostly predictable business world go haywire. Now, stuff happens (and feel free to substitute your favourite synonym for “stuff”). Unpredictably. Out of our control. If you try to fix something over here, then something goes wrong over there. When you try to implement big initiatives, nothing really seems to change (unless we hold metaphorical guns to people’s heads—there’s that whole “resistance to change” thing going on). Yet sometimes, when something seemingly small or what looks like a fad pops up, it turns out to be a complete game-changer that few people seem to be able to resist. Who would have ever thought that an online bulletin board would eventually doom newspapers’ classified ads? Or that a couple of guys hauling an air mattress out of a cupboard would threaten hotels? Or that people sharing rides would cause taxi industries all over the world apoplexy?

Part of the reason I think that this stuff seems so challenging for most people is that we’ve all been trained to see things in a complicated way. This way of seeing really came out of the Enlightenment era when people began to think about science, art, music, literature, architecture, education, economics, and other undertakings of humankind in a step-wise, break-it-down-into-little-pieces, make-it-comprehensible, fashion. In a model that is based in complication, the individual parts (as many as there might be) are enumerable and identifiable. Once you get the plan or recipe for putting them all together, you can repeat that plan as often as you like with pretty much the same outcome each time. Small interventions will yield small changes; big interventions yield big changes (and the changes will likely cascade in a way that is more-or-less predictable).

Most of what we know and have been taught works this way: factory floors, scientific method, education system, most organizations through the 1940s, 50s, 60s, and into the 70s. On the other hand, complex systems work differently. You can’t identify most of the moving (influencing) parts. Following the same plan twice won’t get you the same outcome except by chance. Small interventions eventually will result in large, systemic, but largely unpredictable, change.

Think of it this way:

Building a house or going to the moon?
That’s complicated.
Raising children? Complex.

Think about raising children for a moment. Start with two babies in the same family and treat them in as close to the same way as possible. You’ll end up with two different teenage or adult outcomes. However, many of the effects/intentions will likely be the same—are they polite? Do they value learning? Do they have strong, healthy self-esteem? So long as you watch for indications that might signal these intentions going off the rails, and step in with a few, well-chosen conversations and soft nudges (small interventions), your real objectives as a parent will more-or-less be realized. Going in with a heavy, disciplinary hand, however (a big intervention), will likely result in little positive change but an unpredictable new trajectory that may lead who-knows-where.

In an organizational environment, when someone presents me with a list of goals or objectives (especially so-called SMART goals) I always ask for each one: What is the intention behind this? Whom does it serve? In what way? Why is this important to the organization? What about this goal is important to you, personally? What’s important to those who are also touched by what this goal might do? These sorts of questions will help everyone explicitly understand the intended effects. These effects are the real “objectives” and intentions for the organization, the changes in relationships and interactions for which the organization strives. The nominal goals themselves are merely proxies, representing a few of possibly many manifestations of the intention. Understanding what it would look, sound, feel, or even smell like when the intention is being realized – and conversely, when events move in an different direction from that intention – provide a manager’s navigational guidance.

The tricky thing about a complex environment is that the organization’s trajectory – its eventual path through its business environment – is not really predictable with any accuracy. However you may think that path will unfold will likely change because of any number of factors not in the leaders’ or managers’ control. This simple reality that corresponds to most people’s experiences means that this planning cycle’s goal might not be relevant or useful by next planning cycle. Or, it might not actually represent the organization’s intention or effect. “It seemed like a good idea at the time” isn’t really what most leaders want to report to their board.

Specific goals can, do, and should change with changing circumstances. A well-understood and well-thought-through intention sustains over a much longer time. Intentions are realized through the effects the organization has on all whom it touches. In a complex environment, like that engulfing most contemporary organizations, navigating for effect is the way to manage the organization’s trajectory, rather than striving to accomplish predetermined goals.

This framing creates an interesting challenge for leaders, managers, and especially for HR professionals. It’s no exaggeration to say, quite literally:

By that I mean policies, procedures, and systems for deciding what should be done, how individual and group performance are tracked, how feedback and acknowledgement work in the organization, how tasks are delegated and coordinated, how to engage and motivate workers and managers alike, how personal development occurs, and how correction and discipline can be transformed from “difficult conversations” into empowering learning.

Want to read more about how to transform your organization to operate for scalable capability in the 21st-century? Download my white paper, here.